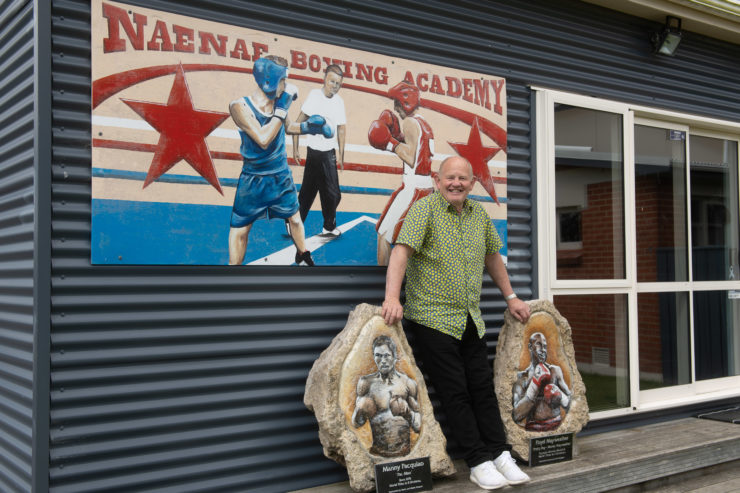 What you see is what you get with Billy Graham. The high energy Naenae boxing coach and motivational speaker can talk a mile a minute, cracking jokes, telling stories and wiping away a tear when he talks about his own mentor Dick Dunn.

Born into a family of six children in 1948, growing up was tough for the young Billy. His father (Neil) had gone away to fight in World War II aged 19 and returned five years later; strong, fit and with nerves shot to pieces. With two hotels and an RSA full of returned service men drinking and spoiling for a fight, Billy‘s home life, where his Mum and Dad drank heavily and gambled, was not uncommon.

“Naenae was a new suburb where soldiers who came back from war were given cheap rental accommodation for three quid a week. There were eight of us living in a two-bedroom house. Mum and Dad were at the pub all the time and we usually had fish and chips for tea. I had boils all over me until I went flatting at 15 and never ate junk again,” he says.

Billy remembers Naenae in the 1950s when all the shops, houses and residents were new: “Hilary Court was flooded with shops and people, there were dances in the Naenae Hall every Saturday night, a Woolworths and a ‘brilliant’ picture theatre. It was fantastic!”

Survival was the name of the game and Billy delivered milk from when he was nine, had a paper run and would go up to the rubbish tip at Wingate to find things to fix and sell.

He was also stealing from a young age and got into quite a few fights. “I was a shit of a kid. I was flogging everything but I kept getting caught. When I was about eight the local cop took me to Dick Dunn’s boxing gym.

Dick was a champion boxer who set up a boxing gym at the Naenae Rugby Club where trouble-making kids like Billy were taken to find an interest and keep them off the streets.

“My life really began when I started boxing, because I had a goal. Three nights a week I was training at the gym and two nights a week I was running. Dick found something special about every boy. He was my Dad, my coach, he was everything to me. I flaming loved him. He rang me when he was dying (15 years ago) and whispered ‘son, I’m in the 12th round and I won’t be coming out son’.”

“I would just turn up for dinner and there was always extra food. I never found out until years later that was Chum’s (Mrs Dunn) dinner and I would say ‘gee how do you know how much to cook?’!”

Billy fondly remembers a boyhood when neighbours looked out for each other. After leaving home, he discovered that a neighbour had been regularly buying groceries for his family. “Mrs Fitz was lovely, she smoked like a train and always smelt like a packet of Park Drive. One day when I was in my 20s, I was having a cup of tea with her and I said: ‘Madge you were so good to us never telling Mum and Dad we were flogging your groceries from your back door.’  ‘Dear’, she said ‘I used to get two lots. I took mine inside and left yours out for you to take, I could never understand why you didn’t take them all’.”

From the beginning, Billy loved the boxing gym and went on to win four light welterweight titles plus an Australasian championship. He says boxing turns boys into men, makes them brave, helps them focus and cope with their inner demons.

He can relate to many of the kids who come to the Naenae Boxing Academy and they relate to him. “They know I’m one of them. Police bring kids in, we have kids whose parents have gang affiliations, but we don’t just want hard case kids. Boxing makes kids resilient. They learn that when they’re in the ring, it’s a fair fight. I tell them that things don’t always go right in life but it’s always your choice how you react,” he says.

Billy played rugby, rugby league, cricket and boxed for Naenae, was a butcher in town and eventually taught at Naenae College. When he left Naenae as a young man he swore he would never go back but he always had a dream to set up a boxing gym just like his mentor and hero Mr Dunn.

The Naenae Boxing Academy opened its doors in 2006 and Team Billy (which includes wife Kerri, son David, daughter Susanna and valued staff and supporters) has helped hundreds of boys. Billy proudly talks about boys who arrived angry, insecure or confused and have become head boys at local schools and won civic and boxing awards.

By the end of 2018, there will be five Billy Graham academies around the country continuing Billy’s vision and Mr Dunn’s legacy.