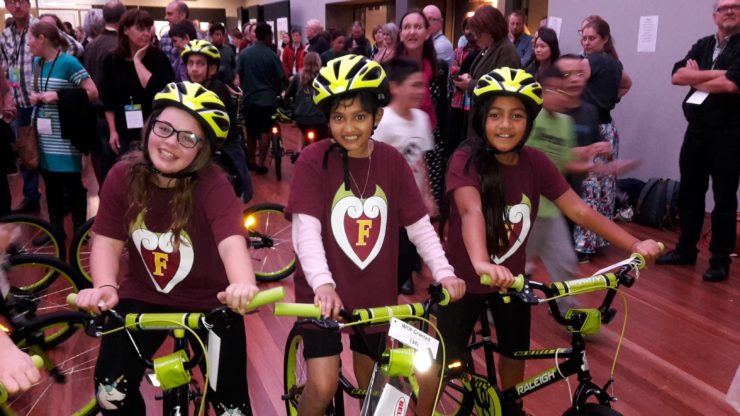 Donation of 50 bikes a welcome boost for local schools

Students from Fernlea School were excited to receive a donation of new bikes for their school.

Nearly 400 staff attending the GNS Science staff conference took part in a team challenge called ‘The Ultimate Give’, where groups assembled a brand new bike from a box full of parts. The 50 bikes were then donated to four local schools that have their own ‘Bikes in Schools’ projects – Fernlea, Wainuiomata Primary, Taita Central and Tui Glen.

GNS Science General Manager of People and Culture Rose Macfarlane said GNS was thrilled to be involved in an activity that had such a strong community focus.

“This was like no other team activity we have ever done. Our staff were absolutely buzzing that it was giving back to the region on so many levels.”

Schools that participate in the ‘Bikes in Schools’ programme fundraise to build a bike track, obtain a fleet of bikes and a container for storage, and often build a pump track and skills area as well. Every child in the school learns to ride a bike and all pupils ride regularly as part of day to day school activities. Greater Wellington Regional Council and Hutt City Council support schools with skills training. Children benefit from this regular physical activity, and confidence at riding opens up biking as a healthy and low cost transport choice for them in future, even if they currently don’t have a bike of their own.

“Hutt City Council would like to thank GNS Science for this wonderful contribution to the ‘Bikes in Schools’ programme” says Road Safety Coordinator Jan Simmons.

“Nine out of Hutt City’s 43 primary schools have a ‘Bikes in Schools’ project already, so that’s around 20% of our primary pupils riding regularly. There are several more schools in the pipeline, and GNS’s generous gift has added momentum to our efforts to expand the programme.”