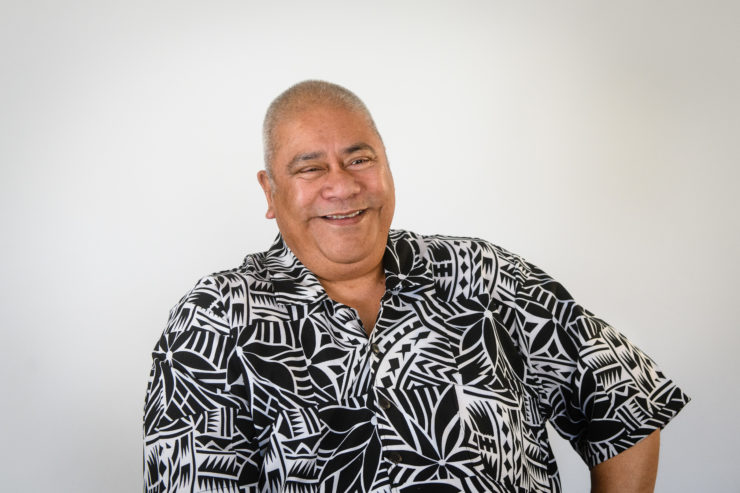 In May 2018, Pati Umaga, along with a group of disabled dancers and musicians, performed his song Siva/Dance at the Vodafone Pacific Music Awards and the audience loved it.  Pati’s Pasifika fusion electronica piece was also performed at the opening of the New Zealand Festival in Wellington in 2015.

“Siva was recorded in my lounge and filmed in Avalon and Auckland in 2015 and released in 2016.  It has been performed with singers and dancers who are disabled or mental health consumers and also a survivor of sexual abuse.  People were surprised at how good we were and that’s what I want to do – break those stereotypes.”

Pati, a musician and disability advocate, became a quadriplegic in 2005 when he slipped in the shower and broke his neck. This random accident saw him move from his hometown Wainuiomata to Naenae where ACC found a suitable house for him.  At the time of the accident, he was a musician and youth worker helping at-risk youth. “It felt like it had ended my life. I didn’t want to see anyone or do anything. My parents visited regularly but I said I was OK and kind of kept them at bay. “

It wasn’t until musician friends including Ardijah, Annie Crummer, Wayne Mason and Warren Maxwell held two fundraising concerts for him at the James Cabaret in Wellington in 2006, that Pati realised how much people cared and started to get involved with community development in the disability sector. “My personal drive has always been to be involved with people. I knew that if I didn’t start getting active and seeking help for myself, as well as helping others, that I wouldn’t live very long.

“I was lucky enough to have a couple of friends in wheelchairs in Naenae who came and visited me. One guy I went to college with had dived off the Petone Wharf when he was 18 and broken his neck. I thought ‘what am I moaning about’ and I started dropping the self-pity and destructive self-critic headspace.”

In 2013, Pati was appointed by Minister Tariana Turia  as one of four Whānau Ora champions, which gave him an overview of how policies and strategies should be structured to help the disabled. His roles have included:  president of the Disabled Persons Assembly, involvement with United Nations for the Rights of People with Disabilities and currently, Chair of the national Enabling Good Lives leadership group. In 2012, he was awarded a QSM for services to the Pacific community.

“There’s a purpose behind all of this work for me to find out how to operate at the government/institutional level and what that means for our people at the grassroots. “

The Ministry of Health is leading the systems transformation approach to change the way services are provided so people with disabilities have choice and control over their care with individualised plans and budgets to meet their needs. Pati says he had poor experiences when he was having 24/7 home support. “I had money and food taken from me, sometimes I would be left lying in a room for hours because someone was late.”

Pati’s role as chair of the Enabling Good Lives group sees him having regular meetings with the policy makers. “They are starting to realise that when disabled people are assessed and provided with support that doesn’t meet their needs, they have more health issues down the line which cost more to resolve.”

Pati’s leadership roles have involved travelling around the country and overseas to meetings and conferences and he is particularly passionate about Pacific people with disabilities having a voice at the highest levels. “We are setting up our own Pacific Island disabled persons organisation to provide our voice and perspective right across government as well as in our own community. We want to be part of the government’s Disabled Persons Coalition. It’s really important for us, as the people trying to help us influence Government policy, currently don’t have the Pacific voice.”

Pati says he will be involved for ‘as long as it takes’, however he is keen to eventually work fulltime, with music to raise awareness and break down stigma. “I think I’ve had my time doing all the strategic/head stuff. I’m now starting to think about using music to break down stereotypes, particularly in the Pacific Island community, where disabled people can be regarded as broken or cursed.

“I’m currently writing music because I want to put together an album which reflects the diversity of the disability community- whether they are Pasifika, Maori, refugees or from any group. I know quite a few producers in the music industry who would be keen to collaborate with disabled artists and I would like to set up a fully accessible recording studio.”

The 60-year-old says at some point disability takes a toll on health. “I have been very lucky so far, but it’s knowing that at some stage your disability will impact and further limit your physical movements, so I think ‘let’s just do it while I can’. “

While the move to Naenae came about due to the accident, Pati says he loves living there now. “I feel safe and confident zapping down to the town centre for a beer or coffee. I feel part of the community. Someone’s always calling out my name, even if I try to go down town incognito!”