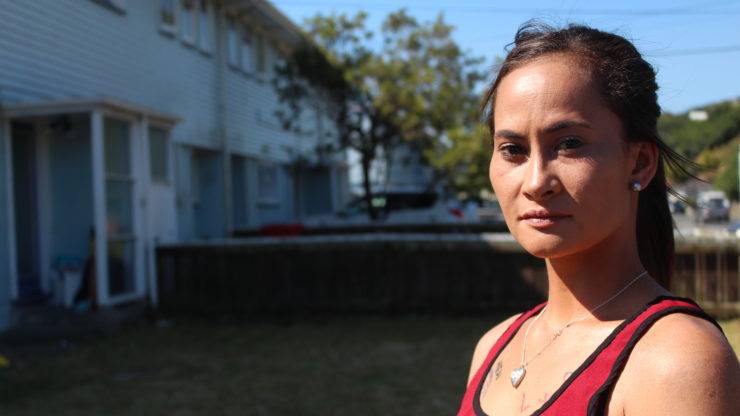 Nicole Gray’s seven-year-old son wasn’t his usual self. He had become sullen and angry. For the first time, he was getting into fights with other kids.

The pregnant working mother and her boy had spent seven months homeless moving from one overcrowded dwelling to another. They shared the homes of family and friends, top and tailing together on couches, sometimes staying only a couple of nights in one place.

The little housing support Nicole received from government agencies at this time was short-term, emergency accommodation in motels and hotels. When these were full in Lower Hutt, they were moved to a house in Porirua deep in gang territory. The little family’s house was burgled and life in Porirua, far from friends and family, was an uneasy existence.

Sharing accommodation with other families and the resulting strain on relationships, the lack of privacy and their uncertain future was having a worrying effect on her son.

“I think the big thing was not having stability or a routine or his own space, having somewhere that was his own, somewhere to belong,” she says. “That affected him and he didn’t know how to express that. Sadly, my little boy had to grow up.”

While Nicole comes from a loving and close family, who supported her throughout her ordeal, her family members’ homes were already at capacity and couldn’t accommodate her in the long term.

To complicate life for homeless families, moving in with family members, even in overcrowded conditions, can reduce their chances of getting a Housing New Zealand house.

While living in Porirua, Nicole would drive each morning to Wainuiomata where she worked and her son attended primary school. Days started before dawn and ended late. But keeping her son in the school he knew and loved was essential, she says.

“School was one thing that gave him real stability. Changing schools would have made it much harder for him.”

After her youngest son was born, things got worse. At 12 weeks, he contracted meningitis, one of several serious yet avoidable illnesses linked to overcrowded living conditions.

By this time, Nicole was growing increasingly fearful that, unable to provide a secure and stable home for her children, the boys would eventually be taken from her by Oranga Tamariki-Ministry for Children.

What kept the family stuck in this nightmare was the law of supply and demand. There are not enough private rentals in Lower Hutt to meet rising demand, in part driven by Wellingtonians escaping big city rents. So the rising costs of private rentals have been moving beyond the reach of many Lower Hutt residents on low incomes. Nicole had effectively been excluded from private rental market. Private rents in the northern and eastern wards climbed 26 and 25 per cent respectively in the last three years and 20 per cent in Wainuiomata.

When she was house hunting, Nicole says the door was always closed. Landlords spent little time weighing up the choice between professional double-income couples and a single pregnant mum, even if she was in full-time work.

The second reason Nicole was getting nowhere was insufficient social housing. While the family was on the public housing waiting list – a priority case, she was told – the waiting list in Lower Hutt leapt 111 per cent between June 2017 and June 2018.

Anyone who has met the slightly-built Nicole would find it hard to ignore her energy or the sheer determination that must have carried her through what she calls her “season of homelessness”.

But seven months of ceaseless pressure and uncertainty, while working full-time, house hunting and caring for two young children, was taking a toll.

When her mother passed away, Nicole says she was with her mother physically but emotionally she was numb, something that now fills her with regret.

“The thought of losing my children was maybe the one and only motivation that kept me going. I was able to carry on a routine for my children but my brain was overloaded. Anxiety would be another cost for me personally.”

Someone suggested she contact Wainuiomata Community Board member Keri Brown, who has long worked with, and advocated for, homeless families in Lower Hutt.

With Keri now advocating for Nicole, within a couple of weeks the family secured a Housing New Zealand house – their first stable and safe accommodation for several years.

Things have now settled down for the family. Nicole has a newfound Christian faith, which she says provides her life with meaning and guidance, as well as a supportive church community.

Her children are doing well. Her eldest son is back to his old self and now able to open up to his mum about his feelings. Nicole is now preparing to study social work this year.