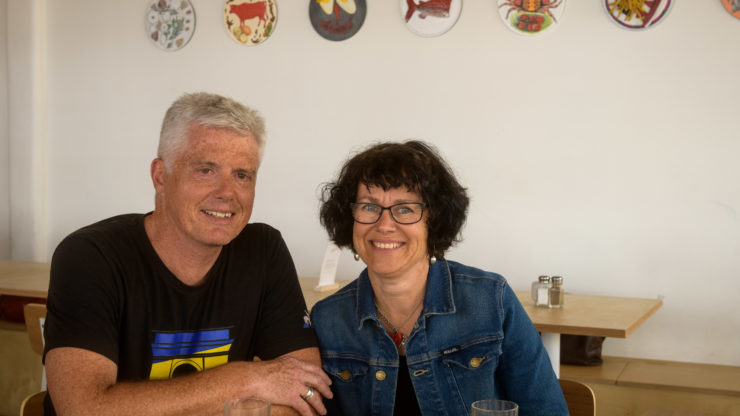 Alison and Martin Robinson believe that social activism and their Christian faith can’t be separated.

In the 1980s, along with Justin Duckworth (now Bishop of Wellington) and his wife Jenny, they co-founded Urban Vision, a group of young Christian activists who moved into tough neighbourhoods in Wellington and did what they could to help.

“One of our (Urban Vision) commitments is that we locate ourselves in communities that have social challenges. We lived in the Arlington Flats for about seven years where we wanted to be good neighbours to our East African community. Because I was an ESOL teacher, I felt quite passionate about the issues facing refugee women and children.

“It just felt like a good community context for us to outwork our faith. Urban Vision began out of Youth for Christ but we now have a covenant with the Anglican Church. Around the country, members of this community are putting roots down in poorer communities and getting involved in whatever is needed. It might be fostering children, supporting people coming out of prison or helping people who want to find a new path,” says Alison.

In 2017, as the church community became increasingly aware of the shortage of housing in Naenae, they decided to occupy a large empty section on the church’s doorstep. “We wanted to highlight the issue of homelessness. We had a core group in the church who were really passionate about it. There had been eight Housing New Zealand units on the site before they were demolished a few years beforehand. We knew of folks who used to live there and were struggling to find somewhere to live,” says Martin.

People from all walks of life, including former residents and local Labour and Green MPs, came to the Palm Sunday weekend protest. “The land was a symbol for us to protest about the way the (National) Government had ceased to focus on folks with extreme needs. We were pleasantly encouraged by the number of people who demonstrated their own sense of angst and disgust at the lack of progress on state housing and the way the government had dropped the ball so badly,” he says.

The Robinsons are very pleased that 60 new state houses will be built in Naenae, with 22 of them to be constructed on the empty Seddon Street site by September 2019. St David’s is also building five small social housing units. “People out of prison are struggling to find housing as now the very poor and even not so poor are on social housing waiting lists and obviously more likely to get rentals than someone out of prison. We hope to be able to offer social housing to some of these people who we know are in desperate need,” Alison says.

“We want to try to create a church space that provides a possibility for folks who are trying to carve out a new track and a new way of living and have a faith commitment,” Martin says.

The Robinsons have been chaplains at Rimutaka Prison since 2010 and say there is a real need for housing and wrap around support for former prisoners.

Prior to 2014, the Department of Corrections supported work and community visits for prisoners to help them reintegrate back into society. However in 2014, convicted prisoner, Philip Smith escaped from a day release programme and fled to Brazil. Within a year, the number of prisoners allowed to work outside the wire halved. “Suddenly everything changed and became more custodial-focused and the more forward-thinking rehabilitation ideas were chopped. They have only just started coming back,” says Martin.

Alison is one of the founding trustees of an initiative which aims to be a launchpad for former prisoners. The Trade School Café opened in Everest Avenue, Naenae in September 2018 and will offer employment opportunities to people who have been incarcerated in Arohata Prison.

“We want the business to be sustainable and ultimately have Trade Schools cafes around the country. The barista programme in the prison has been a real success and we hope that a number of people will be able to get work experience to launch them into the work force. A job gives people a legitimate income and self-respect. If people can’t get work after they are released from prison, boredom sets in and they are more likely to return to crime,” she says.