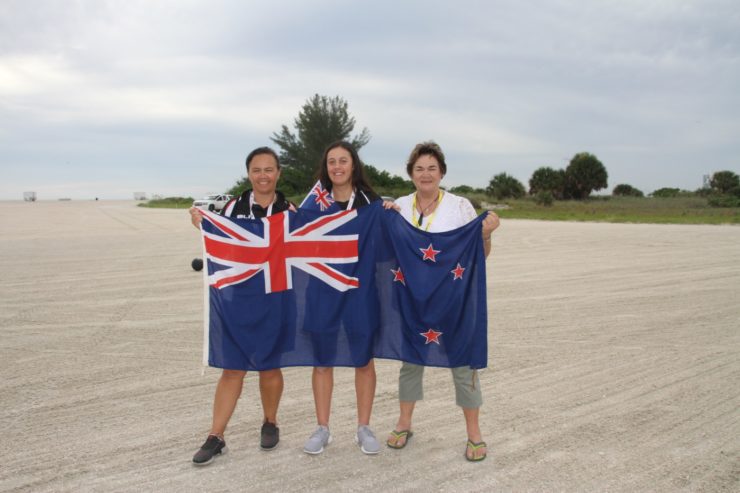 Former White-Sox captain and coach, Naomi Shaw grew up near Fraser Park and has spent more than 55 years in softball, as well as other sports there. She is in the New Zealand Sport Hall of Fame in Dunedin and continues her involvement with softball as Softball Officer for Softball New Zealand. Fraser Park became a second home for her daughter Kiri Shaw, who also captained the New Zealand team and Kiri’s daughter Denva Shaw-Tait, who was a member of the Junior White Sox team in 2017.

Our chat with Naomi (Wahine Toa of softball):

My family of six siblings and our parents lived in Taita Drive. Mum and Dad encouraged us all to play sport, so naturally Fraser Park was like a second home for us.

Softball became my main sport and I was actively involved in many club games and tournaments held at the park. I vividly remember as a young mother regularly dropping my baby daughter Kiri off with the Hutt Valley Softball ground manager, Arch Hall, in his office under the grandstand, so that he could look after her while I played softball. Arch was a real sweetie and a life member of the Hutt Valley Softball Association and a softball umpire. He used to dote on Kiri and she called him Grandad. He would have toys ready to entertain her and still managed the Saturday softball activities of everyone else. Kiri also went on to captain the NZ Women’s Softball Team.

All of my family were involved in various sport clubs in Taita and this naturally involved Fraser Park. Others included the Taita Bowling Club (Mum and Dad), Taita Tennis Club (Mum), netball, basketball, soccer, rugby, cricket and squash.

Currently (2018) my daughter, son-in-law, Craig Wallace, and their four children Denva, Sage, Mesha & Zahr are locally based and very involved with sporting activities at Fraser Park through the Dodgers and Saints Softball Clubs. My youngest moko Zahr and his dad Craig have recently become involved in the new Hutt Valley Hornets Baseball Club which is based in the far corner of Fraser Park – they just won the 2018 NZ U13 National Baseball title in North Harbour.

At least 55+ years. The park was in our hood, so we spent a large part of our life playing at the ground in informal play and with clubs based at Fraser Park such as the Taita Rugby Club, Hutt Valley Softball, Saints Softball Club and Fraser Park Squash Club.

Taita families back in the day were quite close and very involved in sport. The park and the river have been our childhood playgrounds. We forged strong friend and whanau relationships through our involvement in sport and recreation.

This is not in a sporting context, but I remember great excitement when the Queen and the Duke of Edinburgh visited NZ in the 60’s. I’m sure they did a circuit of Fraser Park for us primary school kids who all had to sit patiently until they swept in and we had flags to wave. Even more exciting was that one of our immediate neighbours, Mr Symons, was her chauffeur in a shiny black limousine. We were chuffed we knew someone who was so close to the Queen. Mr Symons became quite a famous figure to us kids.

I was inducted into the International Softball Hall of Fame in 2010. The Softball NZ award ceremony was held at Sports House in Seaview and it was a formal occasion. However, my good friends in the Saints Softball Club arranged their own little ceremony for me by surprising me with a presentation at Fraser Park on the softball diamond. Family and good friends were present as were club members. I was given some beautiful flowers and a framed citation with my family around me at the place I regarded as my home ground. It was so right and very emotional for me to be recognised at the very place where my softball career had started, grown and developed. The gesture from my family club of 55+ years was something I will never forget.

What do you think about the new Sportsville development? What are your hopes and dreams for it?

I think the Fraser Park Sportsville complex is fantastic along with the Walter Nash Stadium. The council are doing a great job in bringing such quality facilities into what was once known as a depressed, low socio-economic area. The place has become a thriving hive of positive activity for the central Hutt Valley.

I am really proud of the fact I am from Pomare and Taita and have achieved at international level in my chosen sport. I am so pleased that my grandchildren will benefit from and get to utilise these wonderful facilities.

How has/will Sportsville change things for your sport?

The facilities are not only world class but the shared club rooms will enable greater collaboration between sports based at Fraser Park. I know this sounds very clichéd but I am sure the spin off for all sports based at the park will result in greater benefits to all.

The improved facilities will also enhance softball’s potential to host a world championship tournament. My club hires the AstroTurf diamond for softball training. The benefits of the softer, true bounce surface has meant the players can confidently attack a ball when in fielding practice. Similarly, the surface is great to practice sliding on as no one gets hurt. I have noticed a huge difference in the younger players’ confidence when playing on this surface. Additionally we can also practice in light rain – tournaments held here have often gone on into the night when grass diamonds have been washed out.

Bill, who is also in the NZ Sport Hall of Fame, was a pitcher in the first NZ Men’s Softball Team in 1966 now known as “The Pilgrims”.  They came third at the very first men’s world championship event held in Mexico.  He is a well-known Hutt Valley softball identity and was at Fraser Park to watch the national secondary school softball tournament in March 2018.