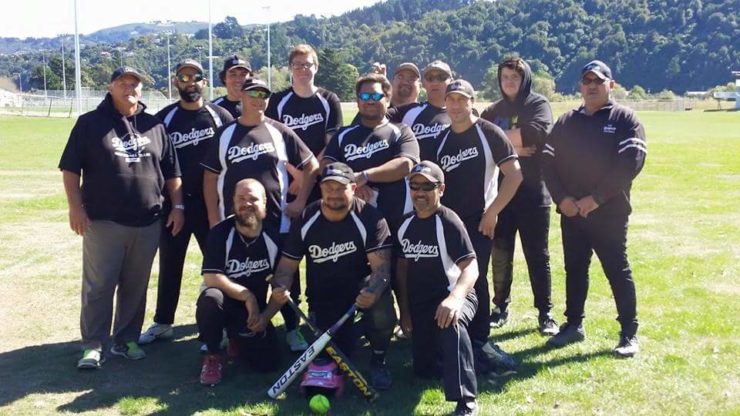 Rick also co-coaches the HV Dodgers under-15s team with his son Brad Carson. Brad is in the Junior Black Sox squad which went to Canada in July 2018 for the Junior World Championship.

Our chat with Rick (a family affair with softball):

I started playing softball for HV Dodgers about 13 years ago for the Good Times, a Hutt Valley Dodgers Softball Club team, which plays in the Presidents grade. Prior to this, in the early to mid 90s, I trained out here with the Wellington Maori Rugby Colts and also played rugby against Avalon.

I was around when they had the Fosters Touch Tournament here in the 1990s, the best teams throughout New Zealand came to play – what a spectacular event that was!

My first impression of Fraser Park was the size of the park – from Harcourt Werry Drive to Taita Drive to Percy Cameron – wow what an unbelievable park with huge promise.

Our son Brad (currently 17, in 2018) plays softball for our Hutt Valley Dodgers Premier 1 mens’ team which consists of four current NZ Black Sox players Nik Hayes, Cory Timu, Joe Ferriso  and Joel Evans. My wife Michelle is manager and scorer for the under- 15 boys’ and under 19s mens’ teams.

I would say 13 years since playing softball for the HV Dodgers Softball club, it’s a very family orientated club with members that have been here well over 30 years, which is why I decided to join this club.

Highlights for me are: watching our young kids playing tee ball right through to softball, the carpark full to capacity with our future softball players heading to the grounds gearing up for their morning games. It’s just so inspirational knowing this game is still alive and kicking with the enthusiasm of the youth of today.

What do you think about the new Sportsville development? What are your hopes and dreams for it?

It’s the best thing to happen in the Hutt Valley with something of this nature being built as a sports hub for everyone. It is going to change things for the better in this area. I hope everyone takes full advantage of the Sportsville hub.

How has/will Sportsville change things for your sport?

I know there are a few changes in the pipeline from the original plans for the softball setup and hopefully it will benefit all our softball whanau in the Hutt Valley but at the end of the day everyone involved will see the benefits.