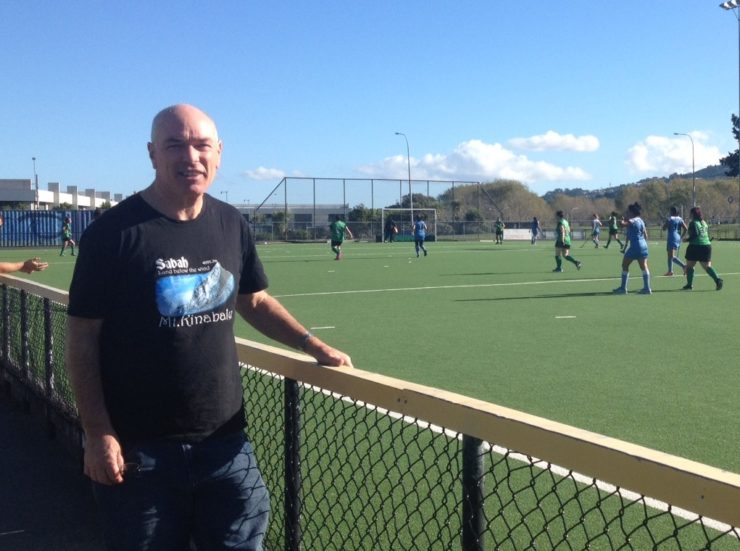 Steve McCarthy is a Life member of the Naenae Hockey Club which he played for from 1973 to 2006. He was a leading light in the development of Fraser Park’s hockey club rooms and artificial hockey turf. He became part of the National Hockey Stadium Trust’s management committee in 1994 and a trustee in 2003.

In the late 1970’s, Naenae Hockey Club , Eastern Womens’ Hockey Clubs and Taita Cricket Club combined to raise money to build the Fraser Park Clubrooms. The development was supported by the Lower Hutt City Council who built the changing facilities downstairs. After many raffles, cake stalls, house painting and negotiating a loan with Trustbank, the building was completed around 1983.

At that time, we played hockey on the river side of the stop bank – with soccer, rugby and cricket on the Fraser Park side. One of my memories is of standing on the first floor of our new clubrooms and watching the park flooding in heavy rain, with water up to the crossbar of the rugby goalposts at the south end of the park.

In the late 1980s we decided to get a floodlit artificial turf. The ground would operate from 7.00am until 10.30pm each night and cater for 1000 people a week. We negotiated with Avalon Rugby Club to release their training ground for the development and approached Hutt City Council for support. The National Hockey Stadium Trust took over driving the proposal as they were already running two turfs in Wellington.  I became part of their management Committee and later joined the Trust.

The new turf which opened for the 1995 season was a real highlight for me. We fenced the site for player security and to protect the turf that cost $750,000 to build – a considerable sum in those days.

Changing in shipping containers and hockey every day:

We changed in shipping containers as we didn’t build the Fraser Park Pavilion until 2002. We established a training ground/six-a-side small turf alongside the main ground which could be used for kids’ hockey. For me the new turf changed Fraser Park – suddenly there were hockey games on the park every day and heaps of players and spectators.

A highlight of Fraser Park for me has always been running along the top of the stop bank and watching sport as I ran. I grew up in the Hutt Valley and have always played or watched sport at Fraser Park.  Our four daughters all played hockey at Fraser Park. Along with a lot of my friends, I coached a lot of school and club hockey and it was always good to play close to home and our clubrooms, at Fraser Park. I coached the Naenae Junior eight-a-side teams for a number of years. Players included Black Sticks player Stephen Jenness. I also coached the Eastern Hutt Womens’ 12 and 13 year old girls’ team who won the regional competition, with some players going on to represent New Zealand.

Hockey changed with the advent of artificial turfs in the 1980s. Games are now played any time from 7.00am to 10.00pm, so getting together with team mates after a game or practice became less common. The new club facilities will be open much longer and I think this will add a new social aspect to the sport. I would expect a steady stream of hockey players in the facility.

Additional turfs also attract young players to our sport. You never get rained off and get a game every week. Access to other sports facilities like the squash courts will help to create a hub for sport in the Hutt Valley.

I admire the vision of the Council and commitment of all of those volunteers involved with the Sportsville. I live in Christchurch, these days, but it is exciting when I visit the Hutt Valley, to see all of the planning coming together and the new facilities being built.